Description of the project

Concrete Cutting & Breaking Co. (CCB) was called on to cut off a 20′ diameter concrete tunnel so a new hospital wall could be poured against it.Â  The purpose of the tunnel is to provide an all-weather, under-street access corridor for patients and employees between hospital buildings.Â  The owners wanted a structurally sound, water-tight wall connection and diamond sawing was the obvious choice. The 30″ thick concrete tunnel was originally mined from a pit on one side of the road, 45′ below traffic, and terminated in the yet-to-be excavated basement area on the other.Â  When excavation was completed the rough edge of the tunnel was exposed. CCB performed the sawing in two stages: First,Â the upper 80% of the tunnel was wrapped with a diamond wire and cut using a 120hp remote-controlled wire saw developed by CCB.Â  This large semi-circular piece of concrete was safely removed by a large excavator as the cutting progressed. Last, the remaining bottom portion could not be easily undermined and wrapped with a wire so it was sawn from the top with a 66″ diameter blade mounted on a hydraulic wall saw. Â  Â  Â  Â 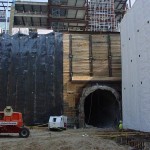 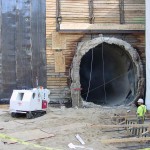 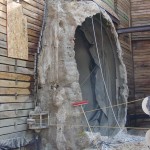 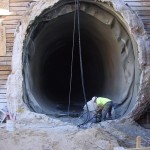 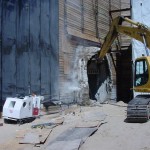 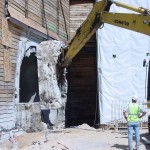 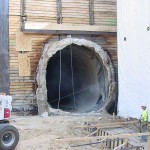 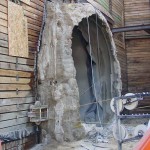 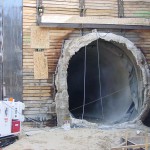 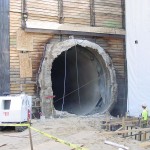 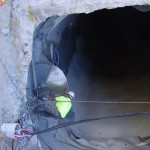 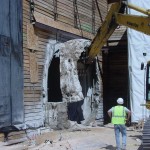 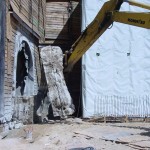 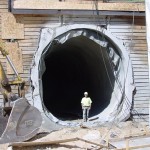